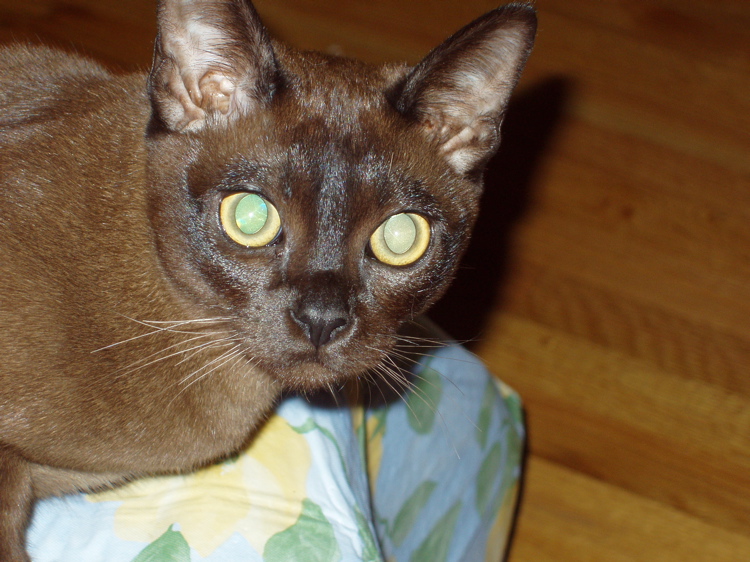 Posted at 00:34h in Memorials by khateam 0 Comments

Buster Brown was sweet sable Burmese boy who was a little shy with strangers, but all he really wanted was to be loved.  When comfortable with people he knew, he was affectionate and playful and a constant companion.  At times I was a little annoyed with him because he was so needy, which I would come to regret — because this was a trait I later would hear described of other kitties affected by FIP.  When he was only ten months old, Buster was the first kitten I lost to FIP.

When he was younger I had found a wonderful home for him with a family.  He was affectionate with them and was settling in but he remained a little shy and skittish and the family was not happy.  Having had Burmese before, they wanted the confidence most Burmese exhibit.  So I swapped Buster for another kitten who was more confident, and Buster came back home with me.

That autumn an upper respiratory infection came into my house and cattery and Buster was hard hit as was another young cat from a different litter.  He seemed to recover from the infection but retained a very stuffy nose, and finally my vet recommended flushing his nasal passages while under anaesthesia, which worked well and not long after he seemed finally to be healthy again.

I had another family come and visit to look at kittens and young cats, and they picked a cute friendly female but they also fell in love with Buster.  I was thrilled for Buster because I knew he needed a home of his own where he could receive more attention than I was able to give him.  And so he went to a new home for the second time.

About two weeks later I received an email that said he seemed to have a cold, and what should they do.  I felt badly that he was sick again and offered to pay for a vet visit, they took him in and he was put on antibiotics.  Another week or so passed and I assumed all was well.  Then a shocking email arrived.  Not only was Buster still sick, but their vet thought he had FIP.  I had never experienced this dreaded disease but had been told that if I bred long enough I would see it.  And now it had arrived.

The family loved Buster and was too fond of him to put him to sleep.  So I offered to meet them at my vet and have his condition evaluated.  I was shocked when I saw him.  I almost didn’t recognize him, he had lost so much weight in only three weeks.  As he lay in my arms he whined like a dog, and when they pulled straw colored fluid from his belly I knew there was only one thing to do and that was to end his terrible suffering.

I’ll never know if Buster would still be alive today if he’d stayed with his first family and not gone through so much transition and been hit by such a devastating respiratory infection, or if he’d just stayed with me, as we were closely bonded.  Regret also is a trait shared by those of us who have lost beloved cats to FIP.  I know I can’t change the past but I have his ashes on my desk to remind me of the sweet kitty that I knew, and of how important it is to find solutions to this terrible disease.