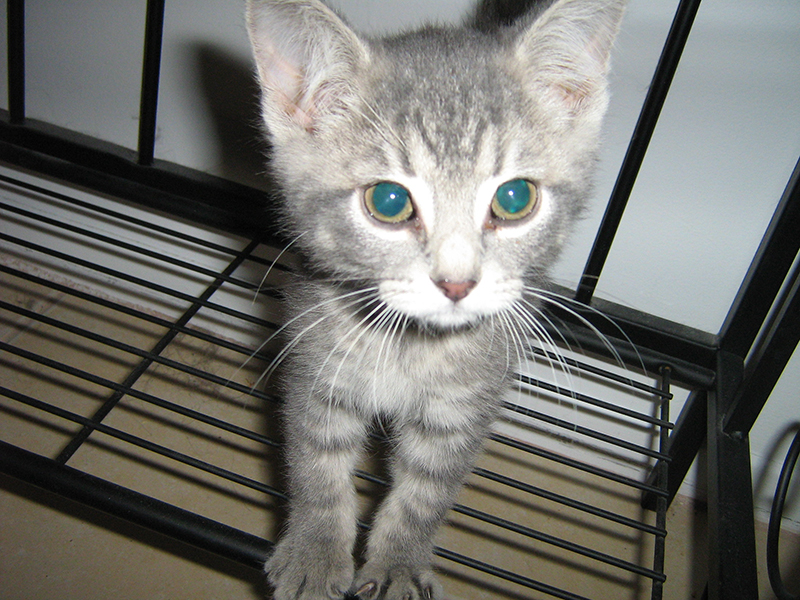 Posted at 16:45h in Memorials by khateam 0 Comments

Jasper chose me as his owner four months ago. As soon as I walked into the pet store & looked into the cage of sleeping kittens, Jasper woke up, stretched & yawned, & began to rub his little head against the bars, purring his signature “motor purr”. He was a beautiful grey & white tabby with the sweetest face I had ever seen. It was love & first sight & my boyfriend Steve & I took him home that afternoon. Jasper brought so much love & joy & laughter into our home & was a wonderful playmate for our other cat Oliver. We adored him.

Then, we began to notice that Jasper wasn’t his usual playful, mischievous self. He had a mild fever & was also rapidly losing weight despite having a ravenous appetite. His belly had become extremely bloated to the extent that he had trouble walking & had to stop & crouch down after a few steps. We immediately suspected that he had worms & got him started on the drug Pyran in order to kill these parasites. After a few days, when no worms were being expelled, we decided to return to our vet.

As soon as I took Jasper out of his carrier & placed him on the exam table, the vet’s face dropped. He began to palpate Jasper’s distended abdomen & quietly told us that Jasper looked as if he was suffering from FIP. I began to cry as I  realized that Jasper would never be coming home. The thick, sticky yellow fluid which the vet then extracted from Jasper’s belly confirmed his diagnosis. Desperate, I asked if there was anything that could be done for this little cat who we loved so much. The answer was grim: at best, Jasper’s life could be extended for another few weeks if we pumped him full of steroids & anti-inflammatories & had him undergo painful fluid extractions. We decided then that we would have Jasper put to sleep. The vet nodded & told us how sorry he was, but that we were doing the best thing we could do. I was sobbing when I said goodbye to Jasper & told him how sorry I was that we couldn’t help him & that I loved him. I left the room while Steve stayed with Jasper & held him until he was gone.

I cannot wait for the day when this horrible, vicious disease can be cured.