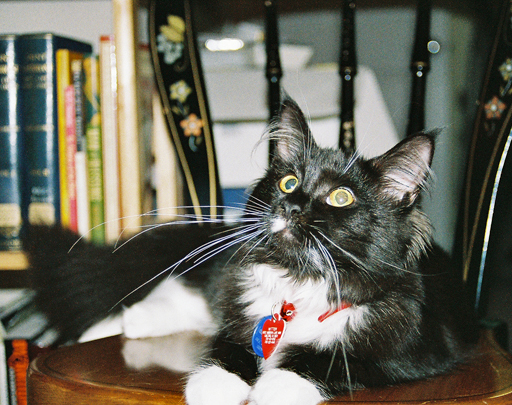 Posted at 18:23h in Memorials by khateam 0 Comments

I had looked at Mitten’s photos on a breeder’s website for more than a month before I finally brought her home. She was the black and white Maine Coon kitten that I had been dreaming about having for years. My beloved rescue cat had recently died leaving his 13 year old litter mate very lonely, and I thought that the beautiful kitten would become Muffin’s new play mate and friend. Mitten was a constant snuggler who slept by my side every night. She gazed at Muffin with admiration, trying to imitate Muffin’s big jumps. When she couldn’t follow Muffin’s leaps, Mitten would copy a little jump like a child dreaming of becoming an athlete. Mitten’s Maine Coon body was never destined to be as airborne as the Siamese-mix Muffin, and I started wondering if there might be a minor neurological problem when the Maine Coon sometimes literally tripped over her own butt, falling while she played.

While veterinarians always thought she had a virus that compromised her immunity, they never knew what it was. Only on the third round of testing in a necropsy was FIP diagnosed from a brain lesion sent to a lab. The photo here was taken just one day before the sudden onset of her illness, which caused her 3 weeks of suffering despite the efforts of excellent veterinarians. The veterinarians gave her their best. Two of them phoned in on their days off to ask how the kitten was doing, and no one suggested that the virus might be FIP until a county veterinarian thought of it as an offside chance after several other test results were negative. It broke my heart to lose her, and breaks my heart that it is so hard to diagnose.