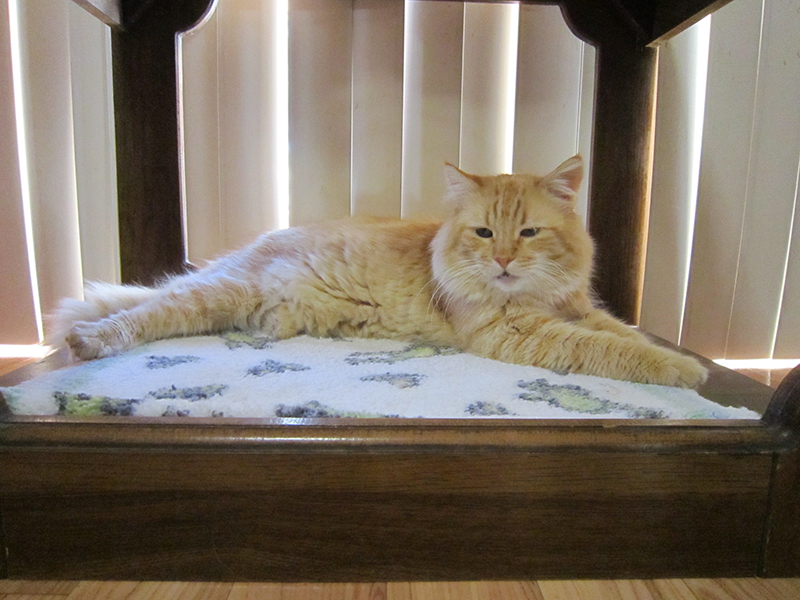 Posted at 02:53h in Memorials by khateam 0 Comments

Raja “Kitty” Nguyen—The sweetest, the tamest orange striped male cat I’ve ever known; a wandering stray for years, abandoned by his owner. Kitty would come to our doorsteps for food during his life on the streets, often sleeping on our from the patio or retreating to the basement of our neighbor’s house for shelter. Heartbroken, we captured Kitty in the summer of 2013, with the intent of providing medical care, vaccinations, and neutering before releasing him back to our neighborhood (the local shelter would euthanize stray and Ferrel cats brought to them). However a bond developed very quickly, and Kitty went from stray to house cat by November 2013.

Unbeknownst to us or our veterinarians, Kitty was not immune to FCoV, and exactly when Kitty was infected or when FCoV progressed to FIPV, we will never know. Kitty became increasingly thinner and pot-bellied during the last month of his life, his anorexia and weight loss attributed to gum inflammation. Kidney and liver failure ensued shortly following Kitty’s teeth extractions, and it was then that we discovered his fatal diagnosis. Kitty passed on the night of Dec 31, 2014, at approximately 9:04 pm Pacific Time. He was cremated today.

Kitty, I love you, miss you, love you forever, forget you never. You are my feline angel.