I was born in 1943 to a Danish emigrant father and a mother who was a daughter of Danish emigrants. However, I have learned that my paternal side is well represented by Swedes. I spent the first 14 years of my life in Southern California (Azusa and San Dimas) where my parents leased and then owned several family-operated poultry farms. Although wholesale and retail eggs were their primary enterprise, they also raised ducks, geese, and turkeys for holiday sales. My father liked cats, but not as pets. He always kept large numbers of them on the farm to keep the rodent population down and their diet was supplemented by blood-spotted eggs. I loved all sorts of animals and raised roller pigeons, ring-necked pheasants, mallard ducks quail. I even had a pet goat and rabbit. My first love, however, were the cats.

My first cat companion was a white short-haired female with brownish ears called MoMo (mother cat in my baby language). She lived with me for 14 years and regularly, and then irregularly, presented me with litters of kittens. I also befriended many of the feral cats and one of my tasks was to sit with a box of kittens when customers came in to buy eggs. I found homes for many kittens, and every once in a while was given a quarter or fifty cent piece. I came to understand the character and personality of cats better than anyone. My life changed in 1956 when a huge summer fire in the hills around our San Dimas farm caused the temperature around the chickens to climb to over 128 degrees and diverted all water used to cool them. Sixty thousand chickens died within a week’s time of heat stroke. This unfortunate event was actually a blessing, because small family-owned poultry farms in Southern California were rapidly becoming non-profitable and this event forced my father to leave poultry farming after 30 years. He traded the property, which had become valuable for homes, for a small warm spring resort in Southern Nevada and from then on my family was truly middle class. The resort was in a valley called the Upper Muddy that was also home for a large cattle ranch. The high school was 20 miles away in the town of Overton and school started with a bus ride at 6:30AM. I entered a new high school as a freshman with great trepidation and immediately fell for my future wife (Gerie) the first day of class. Being taught in a small high school and living in a Mormon farming community allowed me all sorts of experiences I would not have had if I had attended a much larger high school in Southern California. Every capable boy had to be in competitive sports and there were many interesting courses and intra- and extra-curricular activities that stretched the student resources thin. Every student had to participate in multiple activities. My greatest high school experience was with the Future Farmers of America, and I eventually became a FFA state officer.

I was accepted to the University of Nevada, Reno on scholarships from the Union Pacific Railroad and the Max E. Fleishman Foundation in 1961 with the intent of becoming a teacher of vocational agriculture. I soon realized that this was probably not the best career choice, but had no idea of another major. I did however transfer to Animal Sciences at the end of my first year, and was enrolled in much more difficult courses in my second year in preparation for an eventual Ph.D. in that discipline. My life changed once again when I enrolled in a course in Veterinary Sciences taught by one of the two veterinarians who were responsible for a small veterinary sciences program at UNR. I had never had any direct experience with veterinarians before that time. Dr. Marble opened my eyes to veterinary medicine and even let me help him with some of his experimental surgeries. I was hooked immediately and at the last minute applied to three veterinary schools, UC Davis, WSU, and CSU. I was accepted to all three schools but decided to go to UC Davis, as California, which was closer to my home. I was also a Californian by birth (and a Nevadan by adoption). I was also fortunate to have my tuition paid by the State of Nevada under the Western Interstate Compact for Higher Education (WICHE).

I entered veterinary school in September 1963 with the intent of becoming a bovine practitioner (cows and poultry are my second and third loves). I worked weekends and holidays in several research projects and became even more enamored with research. I married my high school sweetheart Gerie in August of 1964 (yes, it will be 50 years soon!). I worked in between classes and studies with one of the pathology graduate students on a new disease of cats called feline infectious peritonitis and was coauthor on my first research paper on FIP in 1964. I was appalled by the lack of knowledge of cats and their diseases but temporarily set aside those feelings while pursuing more training. After graduation from veterinary school I interned in small animal medicine and surgery at Colorado State University, another significant influence on my life and career. I once again realized how little we knew about cat diseases and became even more aware of my life-long affinity and understanding of this species. Prior to starting my internship in 1967, I was accepted as a graduate student at the John Curtin School of Medical Research (JCSMR), Australian National University, Canberra, A.C.T., Australia. Australia had fascinated me all of my life and the JCSMR not only gave me great research training but my first experience with this vast and beautiful country. After completing my internship, I briefly worked in a celebrity practice in Hollywood to earn money to get my family (there was now a daughter) to Australia. My research training in the Department of Experimental Pathology at JCSMR was second to none, but totally unrelated to my future career. It taught me about the experimental method. I obtained my Ph.D. in Experimental Pathology and Immunology with high distinction in 1972. My love of Australia, which I had cultivated by reading books as a child, became a lifelong passion. My hobby, which I frequently reinforce, is the identification and photographing of the plants of Western Australia. I have a large collection of WA flowering shrubs at our home in Winters, CA.

Dr. Pedersen, as long time director of the Center for Companion Animal Health (CCAH), led a team that raised money and designed its present home. The CCAH building was completed in 2006 at a cost of $16M, all raised from private funds. It is recognized as one of the most beautiful and functional buildings on the campus and houses five clinical services and four major research programs.

I returned to the USA in early 1972 to a research position in the School of Veterinary Medicine, UC Davis studying retrovirus associated cancers of animals. This was my first experienced with feline leukemia virus, which we saw in many cats during my schooling, but whose cause was then unknown. My first year in research was not going well and I was considering leaving to take up a post-doctoral research position in transplantation immunology at the University of Washington. Before this was formalized, I was called in by the Dean of the Veterinary School and asked if I would consider taking a position in the clinics in small animal internal medicine. Dean Pritchard had grown weary of hiring clinicians with strong clinical experience but weak research abilities and having them fail to make tenure. He had made a decision to experiment with hiring people for clinics with strong research experience and known clinical potential. I was therefore the first of a large number of UC Davis veterinary clinical faculty that would be hired with this background. It turned out to be a very wise decision, because the clinical program at UC Davis soon became world renown not only for clinical excellence but for research excellence as well.

I have remained at UC Davis since 1972 and retired as a distinguished professor emeritus in October 2013. My first 17 years were spent in clinics, teaching and research, and the next six years in teaching and research. My career became much more involved with administration and research during the remainder of my years at Davis. Following a stint as Department chairman, I became the founder and director of the Center for Companion Animal Health and several years later also the director of the Veterinary Genetics Laboratory. This latter duty refueled a long-term appreciation for the role of genetics in disease. Research into infectious and immunologic diseases of cats and dogs has remained the one constant throughout by career. I remain an active emeritus faculty and continue my first love, research. I have no plans of retiring as long as my health will allow, because for me, retiring to research is much better than retiring.

Although I have researched many infectious diseases of cats, FIP remains my first love, if you can use this term to apply to a disease that is still both common and almost universally fatal. I have come to look at FIP as the “worthy adversary.” It is without a doubt one of the most complex and challenging infectious diseases of any species and I am driven to see it prevented or cured. I realize that the answers will not come from one laboratory and that because it is not like any human disease, that funding will always be less than adequate and come mainly from individuals and organizations that have a personal interest in seeing it ended. My hope is to continue to do my part to keep the disease in the spotlight and I can say that I am not alone. I recently reviewed over 100 clinical and research publications on FIP that have been submitted by research groups from around the world since 2008. No other disease of cats has received this degree of scrutiny.

I am enclosing a more detailed biography of my career with emphasis on FIP research, which still consumes me. My greatest career achievements have been with feline infectious diseases such as FeLV, FIV, FCV, FECV and FIPV. My textbook on diseases in the multi-cat environment, which is now a classic, is perhaps my best creative writing. However, my wife, three daughters, son, and 7 (soon to be 8) grandchildren, all successful so far, are my greatest legacy. However, I do hope that my “paw prints” will remain visible in feline disease literature for some time. Yes, I have always had cats as pets- only two at a time and always males. 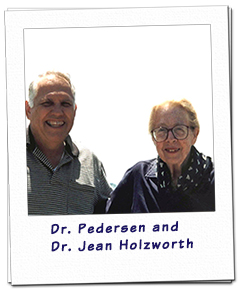 This is a picture taken in 1991 when I received the first Jean Holzworth award for feline research. Dr. Holzworth was in my mind the best feline medicine clinician that ever lived. She received her DVM from Cornell University and spent her entire life at the Angell Memorial Animal Hospital in Boston. She wrote the first modern textbook on feline medicine and I considered her a great friend and inspiration. She gave truth to something that I always believed – you cannot be a great cat veterinarian without a deep and intimate knowledge of the species, including everything from anatomy and physiology to behavior. –Dr. P. 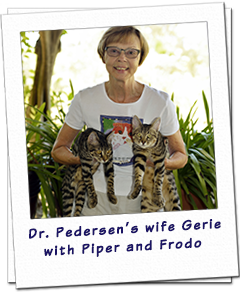 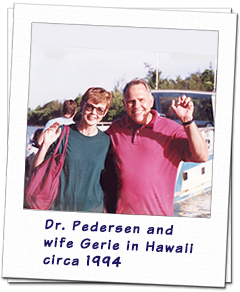 Dr. Pedersen’s wife Gerie with the newest members of the SOCK FIP family – they recently adopted Piper (on right) and Frodo (on left) who are brothers. Frodo and Piper are among a number of former research cats that the Pedersen’s have adopted over the last 40 years.