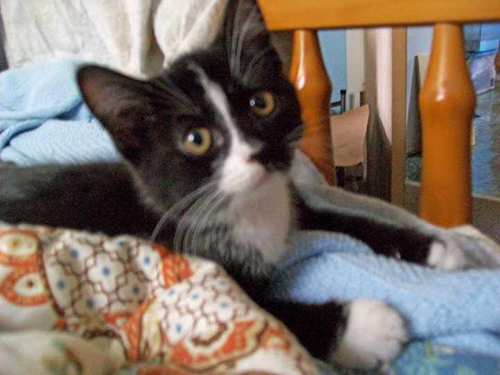 Posted at 15:30h in Memorials by khateam 0 Comments

Francis was born March 19th, 2010 and passed away November 9th, 2012. This photo was taken when she was 11 weeks old. I was taken by her because she was so intense; her look and how outgoing and affectionate she was. When my co-worker brought a few kittens to work in a cat carrier, I knew that I wanted Francis, because she came right up to the door of the carrier and seemed to be talking to me, while her siblings seemed to be lost trying to figure out their strange surroundings. I picked out a grey and white long hair (who I would name Rosa) so they would have somebody to play with. Rosa is still with me and seems to be in good health so far, though it is possible she could get FIP down the road. They were named after Black Francis; the lead singer of one of my favorite rock groups – The Pixies. The vet pressured me to put Francis down after she tested positive for FIP, but I wanted to let her die at home. I knew she wasn’t going to be around much longer and I tried to keep her as comfortable as I could. She died about 8 days after I got her to the vet. She liked laying with me in bed and that was where she was when she passed on. I’ll always remember my special little tuxedo fur baby.