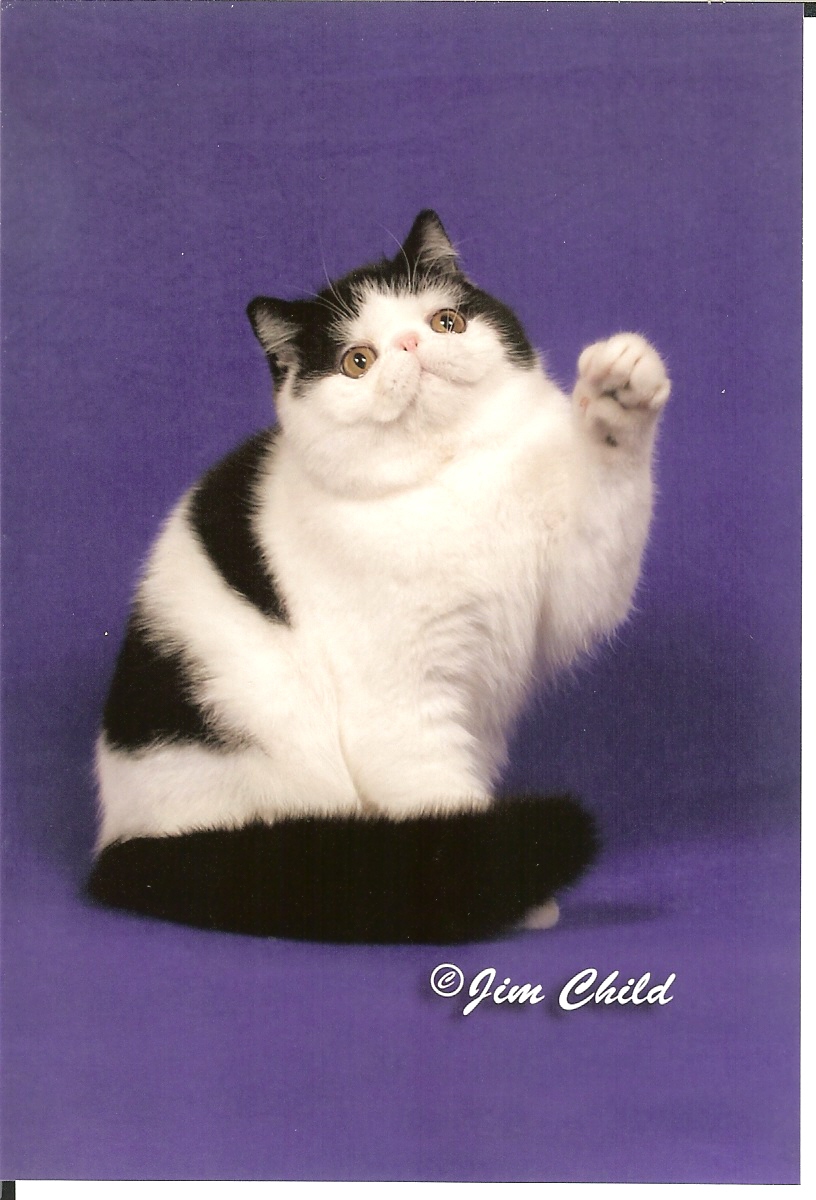 Posted at 00:02h in Memorials by khateam 0 Comments

Panda was an adorable little black and white Exotic Shorthair who was born September 12, 2006.  Both my husband and I fell madly in love with him from the first day we got him.  We debated on names, and after only having him for a couple of days, I was going to name him Teddy, but then, all of a sudden Panda popped out and, thus, for the short time we had him, he was our beloved Panda Bear.

We got him when he was around 4 months old and began showing him.  Panda was made for the shows.  He loved the attention and he absolutely loved the people.  He had a photo session with a photographer and had an absolute ball.  He was an amazing boy.

When he was six months old he got an ear infection which left him with a permanent head tilt, thus his show career ended very abruptly.  That didn’t deter him and he learned to cope with his tilted head.  My vet said it gave him character, and he was still our Panda who loved everyone.  He had so much fun and was a joy to be around.  He constantly kept us laughing with his cute little antics.  Little did we know it would be short lived.

In March of 2008 he became ill and stopped eating.  He became so sick so fast and went downhill rapidly.  All bloodwork pointed to FIP.  From the time he was diagnosed until the time I had to make that dreadful decision to let him go with grace to Rainbow Bridge, was somewhere around two weeks.  The day I came home from work and found him barely able to move and just lying, I knew I had to help him along.  He hurt so much when I touched him to try to comfort him.  It literally broke my heart and I shed so many tears for him.  He just looked up at me so pitifully for help and I could not do anything to ease his pain.  That’s when I took him to keep him from any more suffering.  Panda was only with us for 14 short months but during that time period he gave us so much happiness.  My husband, too, adored him and was absolutely devastated when I called him to tell him my decision.  We kept hoping a miracle would happen.  How could this be happening to our adorable little Panda Bear?  He was so young yet.

Panda Bear is now one of the happy little kitty angels by God’s side and one day we will see you again.  He may not be here physically, but his memory will never die, it will live on in our hearts.  Panda was very special indeed and everyone who met him or knew him couldn’t help but fall in love with him or laugh at his antics.  Rest in peace my dear Panda.