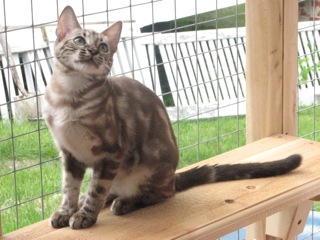 Posted at 01:39h in Memorials by khateam 0 Comments

The day I went to get Sandalwood, in June of 2009, I knew the moment I set my eyes on her that we were going to be the best of friends. She was snuggles next to a male Bengal buddy in a donut bed like he was protecting her. She was tiny and soft as silk to the touch. Her beautiful   Sandalwood colored marble pattern was truly captivating. I could not wait to start showing her. In my eyes she was already a Supreme Grand Champion.

When I got her home I put her in one of the bedrooms isolated from my other cats. My male Bengal snow leopard kitten, Caesar, sat outside the rom all day anxiously waiting to meet this new girl. The first time we let him in the room to meet her it was love at first sight for both of them. They were inseparable babies.  She also grew very attached to me. I would pick her up and she would cuddle in my arms like a little baby girl. I loved her deeply and had great plans for her future.

Then, in September, after she had only been with us for two months, I noticed she was not very active as she usually was. She stopped socializing and playing with Caesar and my other cats. She was laying in her enclosed cat bed, which was in front of our bed, all day. Her abdomen was looking bloated and distended.
I took her to my vet to be checked on September 3rd, 2009. My vet did some blood work which came back with a very high white blood cell count. He then did an x-ray and took me out back to look at it. The x-ray showed that her abdomen was filled with fluid instead of gas. My vet told me he was worried and that I should keep Sandalwood isolated in a room separated from my other cats. My worst fear emerged in my mind and I asked him if he thought this could be FIP. He told me right at that time everything did point in towards FIP. I was shocked to think that this could happen to this poor little lovable girl kitten that I had only had for a couple of months. I left her at the vet’s office overnight and drove home completely devastated and not knowing what to do.

I picked up Sandalwood the following day and brought her home to put her into an isolated room. I had prepared the room with a recliner chair for myself to sleep in, some cat beds, toys, and a space heater to keep her warm at night. I brought her water, cat food, and always diced white meat chicken four or five times a day and she kept on eating well for the next two weeks.
Upon recommmendation from a breeder friend, I joined a yahoo group on the internet called FIP-to-health where a known homeopath was recommending homeopathic remedies as a menas of treating cats who had been diagnosed with having FIP. I went on this website every day and read the e-mails from her clients whose cats were being treated with the homeopathic remedies for hours with this small ray of hope that somehow there would maybe be a miracle that could happen for Sandalwood. I ordered the remedies that were recommended for Sandalwood on the internet , as I went to every health food store within a 40 mile radius of my house to locate the remedies. I could not find 50% of the remedies in any of the local stores including Whole Foods, Morning Glory, or Axis Natural Foods.I had to order the Aconite which I needed to make the aqueous dose before I had her fluids drained at the vet. The Aconite did not arrive for a week later.

My husband or I would go into her private room every night and sleep in the recliner most of the night so she would not be alone. She would jump up in the recliner and cuddle next to me and we would fall asleep together. I think this nighttime attachment made our bond even closer. The kitten became very dependent after she got FIP. It was as though I was the only thing she had left. Caesar would go to the wall sized window that separated her private romm from our kitchen and howl at call for her and she would go up to the window on her side and call for him and I could not put them together. I had taken away his companion and he di not know why.

The Aonite came by mail on September 14 and I brought Sandalwood to the vet to have her fluids drained on September 15th. The morning of September 15th, I made the aqueous dose and gave it to her in the morning in a syringe. My vet performed the draining procedure. When finished, he came out and told me the more fluid they drained, the thicker it got. It was the yellow, sticky fluid that is found in FIP.

When I got Sandalwood home, she ate her diced chicken and walked around the room. My husband slept in her room until 11:00 p.m. that night and then I went in and slept there until 4:00 a.m. Then I went upstairs and slept until 8:30 a.m. When I came back downstairs to check on her, the morning of September 16th, she was in the back of a large box. I took her out and she could not stand up or walk. I put her inside her bed  and she fell down trying to get out to get to her food and water dishes. I tried to feed her with a small spoon, but she would not eat much. She tried to walk over to her food dish, but her legs gave out from under her.

I took her to the vet again on September 16 at 3:00 p.m. My vet was out, but the assisting vet said she could try giving her sub-que fluids but it may not help her at this point as she already had jaundice and they thought her organs had already started shutting down. I told them to try giving her the fluids. They did and left me in the room with her for about an hour. When the vet came back she had not improved and her mobility was not any better. She told me I could take her home. I looked up into Sandalwood’s eyes and the eyelid had started to cover over her eyes. I shook my head up and gave the o.k. I scribbled my name when I signed the consent form to put her to sleep.

The last thing I remember is laying her on the table in that room and telling her how much I loved her as I looked into those adoring big green eyes for the last time as she slipped away peacefully. When I think of my beautiful little bengal marble girl, the first thing I see is that last look of admiration in those big green eyes.

Loved and Remembered By,
Hermina Hart